So this wasn’t my first visit to Jordan Sushi. This is probably my favorite local Sushi place. North Vancouver is absolutely flooded with sushi restaurants but Jordan’s scores points for a number of reasons.

This time that I went I went on a Thursday with one of our other writers Taryn, we were starving and in the mood for something filling. We sat down at the classic dark wood tables and took a moment to look around. The interior of Jordan Sushi is dark, but the restaurant is very open, and they have decorations and additional menu items up on the wall. Jordan himself was where you can usually find him, in the kitchen making great sushi. The little character of him on the menu has an amazing likeness to the real thing.

Taryn and I decided to split some appies we got agadashi tofu, and veggie gyoza.

The veggie gyoza was amazing. I have had some bad veggie gyoza so it was nice to get something satisfying and flavourful. The agadashi tofu doesn’t come sitting in a sauce, instead it is prettily displayed on a plate with two different sauces to choose from. My favourite sauce is the creamy one, you’ll know what I mean if you decide to try it!

For our main course I got ramen and Taryn got a roll. The ramen was a new item on the menu that I had not tried before. The noodles were good, and not overcooked however I found the broth bland. Taryn got a beautiful roll called… well unfortunately I don’t remember the name, but look at the pretty picture I took! You can check out the menu here. I can only write what she told me about it, but I think her face said it all when she tried it. She looked so happy and pronounced it delicious! 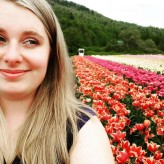 FROM RESTAURANT REVIEWS TO RECIPES TO CITY GUIDES, WE STRIVE TO SHARE OUR ADVENTUROUS ENCOUNTERS AND HONEST ADVICE FOR GOOD FOOD, GOOD TIMES AND GOOD EXPERIENCES.